Washington, D.C. – First Lady Michelle Obama isn’t the only one turning 50 this year.  2014 also marks the 50th anniversary of the first “Buffalo Wing” being sauced and tossed at the Anchor Bar in Buffalo, New York.

With the second biggest eating day of the year after Thanksgiving – Super Bowl Sunday – upon us, there’s no hotter time of year for chicken wings, which have become a staple food of Super Bowl parties in the United States. 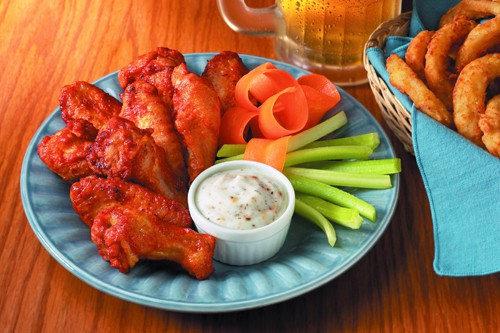 According to the National Chicken Council’s 2014 Wing Report, 1.25 billion wings will be devoured during Super Bowl XLVIII, as fans watch the Seattle Seahawks and Denver Broncos battle for the Lombardi Trophy, matching the record level of 2012.  That is about 20 million more wings than were consumed last year during Super Bowl XLVII.

To put that into perspective, if 1.25 billion wing segments were laid end to end, they would stretch from CenturyLink Field in Seattle, Washington to MetLife Stadium in East Rutherford, New Jersey (home of Super Bowl XLVIII)… 30 times. That is enough wings to put 572 wings on every seat in all 32 NFL stadiums.

Bill Roenigk, chief economist and market analyst at the Washington, D.C.-based National Chicken Council, explains that the increase in consumption coincides with an increase in chicken production linked to increasing consumer demand and decreasing feed costs.

“The National Chicken Council estimates about four percent more chicken will be produced this year compared to last,” explained Roenigk.  “More chickens mean a bigger supply of wings and more favorable prices this year for consumers. Based off of current supermarket features, consumers can expect to pay around five percent less than last January for wings.

“This means that the ‘Great Wing Shortage’ of 2013, that never really was, is officially over.  Sports fans can enjoy this affordable luxury even more this year.”

Corn makes up more than two-thirds of chicken feed and corn prices hit an all-time high in the fourth quarter of 2012, due to two reasons:  the record drought in the Midwest in the Summer of 2012 and the ensuing pressure on corn prices from a continued federal government requirement that mandates 40 percent of our corn crop be turned into fuel in the form of ethanol.

While Seattle is known for many things, including its coffee, Fortune 500 companies and Pearl Jam, chicken wings aren’t one of them.

Residents of Seattle tend to punt on chicken wings, as they are 44 percent less likely to eat chicken wings in general than the average resident of the top 42 U.S. markets, according to The NPD Group’s CREST Local Market service.  A San Francisco victory in the NFC Championship game would have fared even worse for wing consumption.

Here’ a look at how the eight cities/teams that made it to the NFL playoffs divisional round stack up when it comes to eating chicken wings:

-Charlotte (Panthers): Eat 26% more wings than the average resident of the top 42 US markets

“We quite possibly would have seen more than a 20 million wing increase this year based on this data, had the Panthers and Patriots made it to the big game,” said NCC’s Roenigk.  “But with a team from Washington State and Colorado playing in the Super Bowl, the Council has high hopes that chicken munchie consumption will increase as a result.”

Interestingly, a city without a team, the residents of the Columbia, South Carolina market, have the highest order rate for chicken wings among the 42 local markets tracked by The NPD Group … 56% more likely to eat wings than the average eater.

More than half (51 percent) of U.S. adults who eat chicken wings said they typically like to eat their wings with ranch dressing, according to a new National Chicken Council poll conducted online in January 2014 by Harris Interactive*.  Ranch is once again the #1 side or sauce typically eaten with wings, but down six percent from 57 percent one year ago.  Only about one-third (32 percent) prefer blue cheese dressing.

Northeastern wing eaters, though, are significantly more likely to prefer blue cheese dressing (45 percent) than those in the Midwest, South (both 31 percent) and West (23 percent), while those regions are more likely to prefer ranch dressing.  Of all U.S. adults who eat wings, barbeque sauce, not blue cheese, comes in second after ranch as the dipping sauce most typically eaten with wings, at 35 percent.

The data also show that more than four in five U.S. adults (81 percent) eat chicken wings, up two percentage points over last year.  Consumption does not vary significantly by gender.  Women (78 percent) are just as likely as men (84 percent) to roll up their sleeves, break out the wet naps and eat a few wings.

Women (62 percent) are just as likely as men (67 percent) to choose Buffalo style as their favorite.  More than four in 10 (44 percent) women aged 18-34 like their Buffalo wings hot, significantly more than any other female age category.

After Buffalo (65 percent) and barbeque (49 percent), another favorite flavor/style of chicken wings is breaded/fried, at 35 percent.  Teriyaki (33 percent), sweet and sour (29 percent) and plain (28 percent) round out the poll.

Where do Americans Get their Wings?

The National Chicken Council estimates that of the wings eaten during the Super Bowl, 75 percent will come from food service outlets and 25 percent from retail grocery stores.

Although the vast majority of wings eaten during the Super Bowl are purchased from food service outlets, such as restaurants, bars and wing and pizza places, wing sales at grocery stores and supermarkets spike dramatically the week of the Super Bowl, and the data show that consumers also stock up the week before, too.

According to Nielsen Perishables Group FreshFacts® data, both fresh and prepared wings totaled $1.7 billion in sales at stores covered in their system for the 52 weeks ending November 30, 2013, an increase of 6.4 percent compared to a year earlier. Consumers cooking their own wings at home can find traditional and unique chicken wing recipes on the National Chicken Council website at www.eatchicken.com.

The vast majority of wings, especially those destined for restaurants, are disjointed, with the third joint (the thin part known as the flapper) being exported to Asian countries and the meatier first and second joints being sold domestically.  The wing is usually split into two parts – or portions or segments – known as the “drumette” and the mid-section or “flat” and sold to restaurants or retail grocery outlets.

A chicken has two wings, and chicken companies are not able to produce wings without the rest of the chicken.  Therefore, the supply of wings is limited by the total number of chickens produced.  When the demand for wings is stronger than the demand for other chicken parts, the price of wings will go up.

The wholesale price of whole wings is currently the third highest priced part of the chicken, after the tender and boneless-skinless breast.  But still a steal compared to other proteins in the meat case.

Wing prices traditionally go up in the fourth quarter of the year as restaurants stock up for the Super Bowl, and prices usually peak in January during the run-up to the big game.

Although America’s taste for chicken wings is no hotter than during Super Bowl weekend, the National Chicken Council estimates that overall in 2014 more than 13.5 billion chicken wings, more than three billion pounds, will be marketed as wings (as opposed to the wings on a whole or rotisserie chicken, for example).  The actual number of wing portions sold is estimated to be 27 billion because, as noted above, the vast majority of wings are cut into two segments or portions.

Dick Winger, who sold hot sauce to the bar, went on the road with Dominic Bellissimo, the owners’ son, to promote the item and sell hot sauce, and the item gradually caught on with restaurant operators around the country.  The concept hit the big time in 1990, when McDonald’s began selling Mighty Wings at some of its restaurants.  KFC rolled out Hot Wings a year later, and Domino’s Pizza introduced its own wings in 1994.  They’ve remained hot ever since.  McDonald’s was back in the wing business last year, and its Mighty Wings will be featured nationwide at most restaurants through the first quarter of 2014.

This survey was conducted online within the United States by Harris Interactive on behalf of NCC from January 8-10, 2014 among 2,018 adults ages 18 and older, among whom 1,576 eat chicken wings. This online survey is not based on a probability sample and therefore no estimate of theoretical sampling error can be calculated. For complete survey methodology, including weighting variables, please contact Tom Super at [email protected].

The National Chicken Council represents vertically integrated chicken producer-processors, the companies that produce and process chickens.  Member companies of NCC account for more than 95 percent of the chicken sold in the United States.