Washington, D.C. – Will Americans be ‘winging it’ for the Big Game? The National Chicken Council (NCC) today released its annual Chicken Wing Report, and the answer is a resounding “yes!”  NCC projects Americans’ consumption of the unofficial gameday menu staple – the chicken wing – will hit an all-time high at 1.38 billion wings during Super Bowl LIII weekend, as the Los Angeles Rams and New England Patriots battle for the Lombardi Trophy. This figure is up two percent, or about 27 million wings, from 2018.

How do 1.38 billion chicken wings measure up?

As Americans unite around their shared love of the chicken wing during Super Bowl LIII, NCC is petitioning President Trump and Congress to declare the Monday after the Super Bowl a federal holiday: “National Chicken Wing Appreciation Day.”  Declare your support for the federal holiday – and love of the wing – by signing the petition here.

Download an infographic of the wing data by clicking here.

The vast majority of wings, especially those destined for restaurants, are disjointed, with the third joint (the thin part known as the wing tip or flapper) being exported to Asian countries and the meatier first and second joints being sold domestically.

The two segments or portions, are known as the “drumette” and the “flat,” as opposed to the whole wing.  So each chicken produces 4 wing segments. 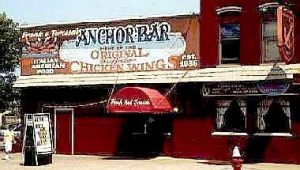 Cooking the whole bird was trendy in the 1960s and 1970s, but in the 1980s, U.S. consumers started preferring boneless-skinless breast meat, and wings became an inexpensive byproduct for chicken producers.  Restaurants and bars realized they could charge low prices for the relatively inexpensive protein, and due to the spicy/salty nature of the sauce, they discovered that beer sales would go through the roof when customers ate wings.

At the same time, sports bars with multiple TVs and satellite dishes were becoming more and more common in America thanks to rapidly developing technology; and the most popular sporting event to watch with friends in bars is football.  Wings were easily shareable and affordable, a great “group food” to eat with other people, and are the perfect pairing with a pitcher of beer. And so the pigskin-chicken wing bond was born.